The last week in Yellowstone was an eventful yet learning experience for me. We learned about three different things while we where there the Bison, Wolves, and climate change. These three things play an important role in the Yellowstone Ecology and without them it is possible that we might not have a well rounded Yellowstone.

The first thing was the climate change and the speaker really got into the whole thing but what got me was, that he tried to convince us but at the end he wasn’t able to tell us how.That was not at all fun and really ruined that talk. Although I did get to learn a bit about climate change and think about how it affects the Ecology.

He talked about how the trees would only grow on one side of the rock and that was due to the amount of shade to sunlight it got. The trees had an ideal growing spot next to those rocks and that’s the only spot they really grew. The climate plays an important role in the Yellowstone ecology because it lets the growing seasons happen and helps provide nutrients to everything and allows for there to be suitable habitat for the animals in Yellowstone the next day we talked about Bison.

The Bison day was an alright day we ended up doing the Bison Demographics to help see what herds of Bison there are and what their patterns are. We also then had a big game biologist come in and speak with our class it was a good and short power point and left me with great thoughts on why the Bison are important to Yellowstone.

The Bison play an important role on competition for food and habitat with the notorious elk. The Bison and elk have the same food source and so the herds of elk and bison have to compete for that food source. The bison also play a role in the growth of plants and vegetation so that when they graze they help produce better and more palatable food source. They also play important roles such as food sources for wolves which I will talk about and the birds of prey when the animals die.

The last talk we had was on the biggest and most important role model in the ecosystem the wolf. The wolf is the key mammal of Yellowstone without it there was an abundance of elk and bison that where to much to control. When they introduced the wolves again it really started to rattle people but it overall helped reduce the abundance of all other species and helped improve the plants and birds. The wolves i believe are the biggest influence of the park and Yellowstone ecosystem but are not the only ones. There are also diseases that help reduce big populations and you also have a lot of natural disasters that help equal out the ecosystem. 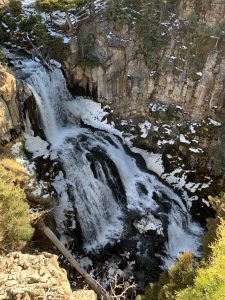 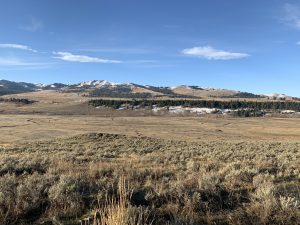 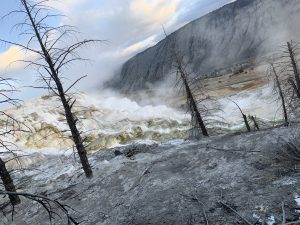